There has always been speculation about who or what the Nephilim were. If you don't know what the word means, you may understand it better by the King James Bible's definition.
Genesis 6:4- There were giants in the earth in those days; and also after that, when the sons of God came in unto the daughters of men, and they bare children to them, the same became mighty men which were of old, men of renown.
Nephilim is the Hebrew word for the offspring of fallen angels and human women. These hybrid creatures were extremely tall, strong, and evil. They are the first mingling of two types of genetic code that should never be combined.
God had a very strict rule regarding Nephilim- kill them all without mercy.
Genesiss 6:7- And the LORD said, I will destroy man whom I have created from the face of the earth; both man, and beast, and the creeping thing, and the fowls of the air; for it repenteth me that I have made them.
God chose the last pure human from among mankind, Noah, and told him to build an ark so that the human race would continue. God then brought to Noah two of every kind of unclean animal and seven of specific clean animals. This ensured that it was pure dna that entered the ark. Every other creature was destroyed during the flood.
The problem is that sin endured. Sin is part of our dna because of Adam and Eve taking of the fruit of the tree of knowledge of good and evil. Their spirit died the moment they ate it. Their soul could now become corrupt. And, their body was changed into a form that would age and die. Sin infiltrated every aspect of our being.
God said that sin would kill us.
Romans 6:23a- For the wages of sin is death;
The problem was that the Nephilim were something very different from humans. They weren't as easy to kill. And, they were evil. And, Satan wasn't finished with his genetic modifications.
There are four words in Genesis 6:4 that you should pay attention to- and also after that.
The Nephilim were referred to as giants. And, they appeared in a specific line- Canaan.
As the Israelites travelled to the Promised Land, God puts something curious in Deuteronomy.
Deuteronomy 2:10-12-  The Emims dwelt therein in times past, a people great, and many, and tall, as the Anakims; Which also were accounted giants, as the Anakims; but the Moabites call them Emims. The Horims also dwelt in Seir beforetime; but the children of Esau succeeded them, when they had destroyed them from before them, and dwelt in their stead; as Israel did unto the land of his possession, which the LORD gave unto them.
These giants were all through the Middle East. And, different tribes of peoples wiped them out whenever they came to the area and found them. 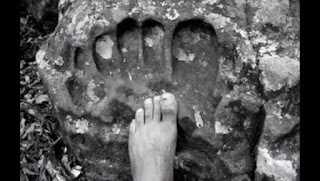 Saute your onion, celery, and bell pepper in butter.
Allow to cool slightly.
Add all ingredients into a bowl and mix well.
Grease a cupcake pan lightly with coconut oil.
Spoon crab cake mixture into the cupcake sections filling them halfway.
Bake at 375* for 20 to 25 minutes.

Heaven: What Will NOT Be There (video sermon)

In His Hands (poem)

'Twixt gleams of joy and clouds of doubt
Our feelings come and go;
Our best estate is tossed about
In ceaseless ebb and flow.
No mood of feeling, form of thought
Is constant for a day;
But thou, 0 Lord, thou changest not:
The same thou art alway.

I grasp thy strength, make it mine own,
My heart with peace is blest;
I lose my hold, and then comes down
Darkness, and cold unrest.
Let me no more my comfort draw
From my frail hold of thee,
In this alone rejoice with awe—-
Thy mighty grasp of me.

Out of that weak, unquiet drift
That comes but to depart,
To that pure heaven my spirit lift
Where thou unchanging art.
Lay hold of me with thy strong grasp,
Let thy almighty arm
In its embrace my weakness clasp,
And I shall fear no harm.

Thy purpose of eternal good
Let me but surely know;
On this I'll lean—let changing mood
And feeling come or go—
Glad when thy sunshine fills my soul,
Not lorn when clouds o'ercast,
Since thou within thy sure control
Of love dost hold me fast .

—John Campbell Shairp
Posted by JCPennyT at 6:00 AM

The Cup And The Hour