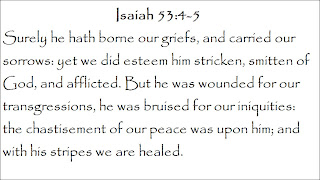 For more information about the Death, Burial, and Resurrection of the Lord Jesus Christ, please click here.
Posted by JCPennyT at 6:00 AM

Our bodies were made by God with some amazing abilities. The way we are put together is a miracle! But, there are times when our choices in life break down the miracle that is our body.
Our digestive system allows our bodies to absorb nutrients while also allowing it to get rid of toxins and wastes. But, what happens when that system starts to break down? It won't stay in the intestines- it's going to carry over into other parts of the body.
Leaky gut is where a part of the digestive system allows toxins to leak into the blood stream. This is also known as intestinal hyperpermeability. This leaking can cause inflammation throughout the body which will lead to many different conditions and diseases. It can also hinder your bodies ability to absorb certain vitamins and nutrients causing you to become deficient in them.
What are signs that you have a leaky gut? Well, do you have food sensitivities, IBS, or an autoimmune disease? How about thyroid problems, skin problems, or mood issues? How about fatigue, headaches, or joint pain? These are just a few signs that you have a leaky gut.
What causes leaky gut? Stress, bad diet, bacterial imbalance in the gut, or an overload of toxins in the system are some common things that can lead to a leaky gut.
What can you do to heal your leaky gut? Well, the best thing would be to follow the GAPS diet. It's a very strict diet that brings you back to eating bone broth soups and probiotic rich foods, like kefir and kombucha, while eliminating all other ingredients. This will heal your gut and clear up a ton of health conditions.
But, if you don't feel that you can go on such a strict diet, you can add in bone broth, steamed veggies, coconut products, and probiotic foods, and eliminate genetically modified foods or artificial food like products.
You can read about these things more in my post Your Health and Trauma.
If you'd like to get a blood test to check for leaky gut, you can ask your doctor to perform a zonuliin or lactulose test, an IgG Food Intolerance test, a stool test or a vitamin and mineral deficiency test.
For more information, please watch this video:

When Mike Roberts fought for the United States in the Vietnam War, he never thought that in the future God would call him back to those lands as a Soldier for Christ. But, that's exactly what happened!
During the early days of his ministry, Mike was introduced to three orphaned brothers.

It was this event that planted the seed for the South East Asia Orphan Foundation, which was established in 1996.
Mike Roberts has been a full-time Missionary on the field of Vietnam since 1997, and has helped over 700 orphans during those 20 years.

If you would like to be a part of this ministry, or for more information, please visit seaof.org.
Posted by JCPennyT at 6:00 AM

Preheat the oven to 350 degrees F.
Put the butter, sugars and vanilla extract in a large mixing bowl. Mix together to cream the ingredients until they're light and fluffy.
Slowly mix in the eggs, beating until the mixture is smooth.
In a separate bowl, combine the flour, baking soda, salt and cinnamon. Gradually stir the flour into the butter-sugar mixture.
Fold in the oats, then the chocolate chips and walnuts.
Dough will be sticky.
Use a large spoon to scoop out large balls of dough, placing them about 2 inches apart on a parchment-lined baking sheet.
Bake for 15 minutes, or until the edges are lightly golden but the center of the cookie is still a bit soft. Do not leave in longer than 15 minutes, they burn quickly!
Allow to cool before removing from pan. These cookies are nice and chewy!
Posted by JCPennyT at 6:00 AM

If This Should Be My Last Year (poem)

If this should be the last year
That I shall know on earth,
I would not want to spend it
In carelessness and mirth.

I would each passing moment
Might glorify my Lord,
That I might know Him better
And feed upon His Word.

I would be more in earnest
Seeking for the lost,
As one redeemed by Jesus,
Bought at such a cost!

I would grow ever like Him,
Whose name I have confessed;
I would be more compassionate
To those who are distressed.

And this may be my last year,
I cannot tell for sure;
But I would live as if it were,
His "Well done" to secure.

Jesus, Draw Me Ever Nearer (song)

Truth Is Fallen In The Streets

The 2016 chosen Word of the Year by Oxford Dictionary was "Post-truth."
Oxford Dictionary defined it as "... relating to or denoting circumstances in which objective facts are less influential in shaping public opinion than appeals to emotion and personal belief."
Yes, we've entered the era of Post-truth, where emotional feelings and one's personal beliefs carry more weight and influence than actual truth itself. And this is a tradegy!
An article in The Economist magazine ("Art of the Lie," Sept., 2016) explains that in today's post-truth society, truth is "of secondary importance..." left to die on the vine; while "lies, rumour and gossip spread with alarming speed."
It was seven hundred years before the birth of Jesus the Christ that the prophet Isaiah bemoaned the fact that his beloved people had fallen into a post-truth era. He wrote, "Judgment is turned away BACKWARD, justice standeth afar off: FOR TRUTH IS FALLEN IN THE STREET, and equity [fair and righteous decisions] CANNOT ENTER."
Can you see the parallels to our modern-day experience?
We are living in a world where the news media outlets have a level of trust by the public as low as that of politicians; and that's mighty low! We have had political candidates who think nothing of tweeking the facts to meet their agenda, and even worse, seem to have no conscience in telling outright lies to their constituents and the general public.
As if this "fall" of the truth within the political arena and among news reporters wasn't bad enough, we find this very same spirit of mishandling of the facts among ministers of the gospel of Jesus Christ!
Many of these ministers KNOW the TRUTH of the Scriptures, but hold back on faithfully preaching it.
Numerous are the reasons for their "holding the truth in unrighteousness," and their failure to powerfully, and plainly proclaim it, but I submit just a few:
1) Many ministers are afraid that if the word of God is preached in its plainness, some will leave the church; therefore, messages are prepared to make the hearers feel good about themselves.
2) Some are just too lazy to do the work of gathering and organizing the truths of God, in a way in which the message of the Bible will be practically received and applied by the hearers, to their benefit.
3) In their attempt to be "relevant" and "non-offensive," they inadvertently water down gospel truths (which, if preached in their fullness, are able to set the obedient free from all types of temptations, vices, sins and strangleholds of life) to the point that true victory in the Christian life is unrealized by the vast majority of professing Christians.
"Yea, TRUTH FAILETH," continued Isaiah the prophet, "and he that departeth from evil maketh himself a prey...". (Isaiah 59:14-15)
Isaiah witnessed that those few who dared to turned from error and embrace truth, became victims to those who despised it. They were lied about, misrepresented, threatened, and in some cases physically attacked! Why? Because they rejected the lies, and chose, rather, to embrace the truth.
Yes indeed. TRUTH IS FALLEN IN THE STREETS. It behooves us all, to cleave to the God of the Bible (not the god of our feelings and emotions), and dig deep into the treasures of His Word to discover the truth (Proverbs 2:4-5; 3:1-3), lest we find ourselves an active participant of this Post-truth era.

-Written by David Cosma
Posted by JCPennyT at 6:00 AM