I was looking for an elderberry syrup that could not only boost the immune system, but would also help with controlling mucus and cough. This is what I came up with.

Instructions
1. Pour the water into a medium saucepan and add the elderberries, echinacea, marshmallow root, ginger, orange zest, cinnamon, and cloves.
2. Bring to a boil and then cover and reduce to a simmer for about 45 minutes to 1 hour until the liquid has reduced by almost half.
3. Remove from heat and let cool until it is cool enough to be handled.
4. Mash the berries carefully using a flat utensil.
5. Pour through a strainer into a glass jar or bowl.
6. Discard the elderberries and let the liquid cool to lukewarm.
7. When it is no longer hot, add the honey and stir well.
8. When the honey is well mixed into the elderberry mixture, pour the syrup into a mason jar or 16-ounce glass bottle of some kind.

Notes:
Instant Pot option: Put all ingredients except honey in pot, seal lid, and set manually for 9 minutes on high pressure. Vent pressure and strain. When cooled to room temperature, stir in the honey.

Dosage:
Store in the fridge and take daily for its immune boosting properties. Some sources recommend taking only during the week and not on the weekends to boost immunity.
Standard dose is ½ - 1 teaspoon for kids and ½ - 1 tablespoon for adults. If sickness does strike, take the normal dose every 2-3 hours instead of once a day until symptoms disappear.

All thy griefs by Him are ordered,
Needful is each one for thee;
All thy tears by Him are counted,
One too much there cannot be!
And if, while they fall so quickly,
Thou canst own His love aright.
Then each bitter tear of anguish
Precious is in Jesus' sight.

Far too well thy Saviour loves thee,
To allow thy life to be
One long calm, unbroken summer,
One unruffled stormless sea.
He would have thee fondly nestling,
Closer to His loving breast;
He would have that world seem brighter
Where alone is perfect rest.

Though His wise and loving purpose,
Clearly now thou canst not see.
Still believe, with faith unshaken,
All shall work for good to thee.
Therefore when thy way seems darkest,
And thine eyes with tears are dim.
Straight to God thy Father hastening
Tell thy sorrows unto Him.

—Author unknown
Posted by JCPennyT at 6:00 AM

Email ThisBlogThis!Share to TwitterShare to FacebookShare to Pinterest
Labels: Devotional 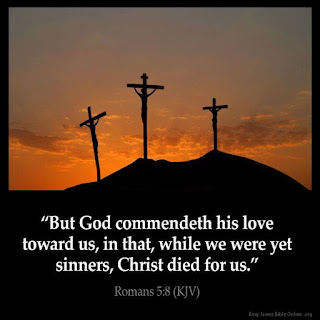 The coronavirus can't hold back the meaning of the Resurrection. Christ died for our sins according to the Scriptures. If you want to know the Biblical timeline of Christ's last week as a man on this earth, click here.
Posted by JCPennyT at 6:00 AM

It's Too Late For Tears (video sermon)