Update On The Fredrick Family

I have written posts about my sister and brother-in-law's journey through tragedy. To review what was previously mentioned please see the posts Trusting God Through Tragedy and Thankful Through Trials.
For a short review, my brother-in-law, Dave, had to have neck surgery because he had some bone spurs growing through his spinal cord. Something went wrong and he slipped into a coma. When he came out he had to relearn how to talk, eat, walk, and many other things we take for granted.
In time, they came to find out that the surgery was unsuccessful, and he again had to go under the knife. This time, the surgery was a success! But, he relapsed in what he had gained and is again unable to walk, can barely pick things up, and has to be fed through a feeding tube.
They are trying to get him into the same rehab facility in Atlanta that helped him last time. They have an evaluation on February 27th through March 1st. Please, keep this in your prayers. If you would like to share in their burden, please visit YouCaring. 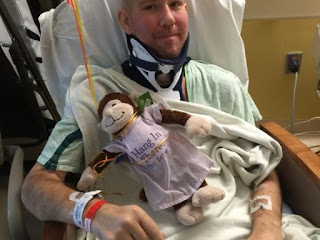 It has been quite some time since I posted an update. We are just over 2.5 years in to our new reality, and have probably seen all the major improvements in Dave's condition that we are going to see.
I now realize that I can't do this by myself, and that it is also too much to expect our children to bridge the gap. Admitting that I need help previously made me feel like I failed, but I have learned otherwise. Failure happens when we refuse to recognize our weaknesses and develop strategies to overcome them.
We are basically in maintenance mode these days. Dave requires 24/7 supervision/care. He gets all of his nutrition via PEG tube; a special formula is pushed by a syringe through a port to a tube on his abdomen that goes directly into his stomach. He is completely dependent on someone else to provide for all of his activities of daily living (ADL: personal care including toilet needs and personal hygiene). On good days, Dave can maintain sitting up straight and well-back in his chair, stand assisted by someone, and occasionally take a few steps using a walker and with someone spotting him. But more than half of his days, he cannot even stay sitting up straight. One day a week, for one-hour sessions, a physical therapist comes to our home. He also has a Speech Therapist . With limited resources, their goal is to prevent regression. It is highly probable that Dave can regain the ability to perform some of his ADLs with more aggressive and frequent therapy, if we could afford it. Such therapy is far beyond my personal ability. Dave will soon be evaluated by Shepherd Pathways for possible re-admission to their exceptional rehabilitation day program, since his most recent surgery to free his spinal cord makes some physical progress a possibility. If approved, we are still looking at several months before an opening is expected.
In the meantime, we urgently need to hire a daily caretaker for Dave. My children help a LOT, but his care is not only time-consuming, it also precludes other equally necessary tasks for all of us (my job duties which provides our income and the health insurance we cannot do without; schoolwork and many extracurricular activities for the kids; even simple housework; and, of great concern for me, the time to be a mother for my children).
So I have decided to use YouCaring to humbly request donations to cover the cost of a home care assistant for Dave and other expenses for recommend therapeutic equipment not covered by insurance.

Recently, there was a commercial for the Keurig coffee pot that aired. A young man is making coffee, and he decides to call his mother while it's brewing.
The mother answers her cordless landline phone...
The rest of the commercial was drowned out by my friend's little boy who loudly exclaimed, "That lady just answered her remote thinking it was a phone! How crazy!"
Posted by JCPennyT at 6:00 AM

Have you ever asked yourself "Why bother?" People ask themselves that all the time. Christians should also ask themselves this.
Why bother coming to church if you don't let the preaching change you? Why bother coming to church if all you do is criticize the brethren? Why bother pretending to be a Christian when you're heart is in the world? Why bother praying when you don't think God is listening? Why bother reading your Bible if you aren't going to do what it says? Why bother soul winning when you don't care if people go to hell or not?
There are many questions that Christians should ask themselves when it comes to their walk with Christ. You need to look at your heart and your relationship with the Lord and see why you bother doing the things that you do as a Christian.
Why should a Christian bother living right?
II Corinthians 5:14 is the answer for why we do what we do. It should be because we love Jesus Christ. It should be because Christ loves us!

Mix all ingredients in a bowl.
Refrigerate for a few so that you can easily roll the dough. Roll dough into small balls, and then roll the balls in sugar.
Place balls of dough 1 inch apart on a cookie sheet.
Bake at 375* for 8 - 9 minutes.
They will be very soft. Allow to cool some before removing from the cookie sheet. This makes them chewy.
Posted by JCPennyT at 6:00 AM

Before confessing Jesus as Lord, Bill Schnoebelen was a Satanic and Voodoo High Priest, a second degree member of the Church of Satan, a New Age Guru, an occultist, a channeler, a 90th degree Mason, a Knight Templar and a member of the Illuminati. It sounds like a far-fetched fairy tale, but the blood of Jesus Christ, God's Son, cleanseth us from ALL sin!

When I behold the Holy One
Who laid aside His robe and crown,
My frankincense and myrrh I bring
A humble offering to my King.

When I behold Him on the cross,
Bearing for me the shame and loss,
In adoration low I bend,
And worship Him- the sinner's Friend.

When I behold Him on the throne,
The once-slain Lamb who did atone,
I join with Saint's unnumbered there
To praise His name, my Lord so fair.

Oh, praise His name! His grace proclaim,
Who lived and died, And lives again.
Forever more He is the same,
Who thro' eternal years shall reign.

I Have Prayed For Thee (song)

I've been hearing a lot about people being "triggered". I've seen some of the videos on youtube of people just losing their minds over one little word. And, I wonder what has happened to people.
This last election really brought it out. Things have been said by Presidential candidates that are very offensive over the years. But, those things can be overlooked if you're voting for that person. But, if that person is the candidate for the opposing party, well their "vulgar words" can't be forgiven!
These triggered people only hear and see what they want to when it benefits what they believe.
But, it's nothing new. It happens when people start to look at what they believe they are entitled to instead of being thankful for what they have.
Israel was the same way in both the Old Testament and the New Testament.
Isaiah 29:21- That make a man an offender for a word, and lay a snare for him that reproveth in the gate, and turn aside the just for a thing of nought.
The Jews in Isaiah's day were making men an offender for a word. They were triggered!
God sent them into the Babylonian captivity, and then after 70 years sent them back to their land. They got to rebuild their temple, and the wall around Jerusalem. They were sent the Messiah. And then the Apostles.
And yet, their leaders hearts never changed.
Acts 22:21-22- And he said unto me, Depart: for I will send thee far hence unto the Gentiles. And they gave him audience unto this word, and then lifted up their voices, and said, Away with such a fellow from the earth: for it is not fit that he should live.
Paul was giving his testimony, and they were listening because he was speaking in Hebrew. But, once he said the word "Gentiles" that was it; they were triggered! According to them he should die.
Really? But, I'm sure they said things that were offensive!
James 3:2- For in many things we offend all. If any man offend not in word, the same is a perfect man, and able also to bridle the whole body.
There was only one perfect man to ever walk the earth. And, guess what? They got offended by Him!
The very word of God is offensive to someone who wants to justify their sin.
Jeremiah 8:9- The wise men are ashamed, they are dismayed and taken: lo, they have rejected the word of the LORD; and what wisdom is in them?
Jeremiah was speaking out against the so-called wise men of his day because they said they had the words of the Lord, but they didn't. When the real words of the Lord came from His prophet look how they responded.
Jeremiah 18:18- Then said they, Come, and let us devise devices against Jeremiah; for the law shall not perish from the priest, nor counsel from the wise, nor the word from the prophet. Come, and let us smite him with the tongue, and let us not give heed to any of his words.
They went about trying to devise ways to get rid of the guy! Sound familiar? They said they weren't going to listen to anything he said, because it offended them- even if what he said was right. That's happening today! They were going to slander him. What?!?!
What does God think of these triggered whiny babies?
Proverbs 13:13a- Whoso despiseth the word shall be destroyed:
Isaiah 30:12-13- Wherefore thus saith the Holy One of Israel, Because ye despise this word, and trust in oppression and perverseness, and stay thereon: Therefore this iniquity shall be to you as a breach ready to fall, swelling out in a high wall, whose breaking cometh suddenly at an instant.
God said they're going to be taken in a sudden destruction. This is going to be both in their personal lives and on a national level!
If you follow the same path that these people followed, then you're going to be devastated. And, when the time comes that you're ready to finally hear the word that God has for you...
Amos 8:12- And they shall wander from sea to sea, and from the north even to the east, they shall run to and fro to seek the word of the LORD, and shall not find it.
Now is the time to humble yourself. Don't be a whiny baby who gets offended by a word.