Now that David has been established, he starts to think back over his life and he remembers that he made someone a promise.
II Samuel 9:1-3- And David said, Is there yet any that is left of the house of Saul, that I may shew him kindness for Jonathan's sake? And there was of the house of Saul a servant whose name was Ziba. And when they had called him unto David, the king said unto him, Art thou Ziba? And he said, Thy servant is he. And the king said, Is there not yet any of the house of Saul, that I may shew the kindness of God unto him? And Ziba said unto the king, Jonathan hath yet a son, which is lame on his feet.
David remembered his promise to Jonathan all those years ago. He called one of the servants from Saul's house and asked if there was anyone left of Saul's house. The servant said there was one man- one of Jonathan's sons- but he was a cripple.
II Samuel 4:4- And Jonathan, Saul's son, had a son that was lame of his feet. He was five years old when the tidings came of Saul and Jonathan out of Jezreel, and his nurse took him up, and fled: and it came to pass, as she made haste to flee, that he fell, and became lame. And his name was Mephibosheth.
Mephibosheth was five years old when his dad and grandfather died. His nanny wanted to get him out of there so that if anyone came to destroy the rest of the family he could survive. But, in her haste to leave, he was injured.
Saul's servant told David about Mephibosheth and where to find him.
II Samuel 9:5- Then king David sent, and fetched him out of the house of Machir, the son of Ammiel, from Lodebar.
Can you image what was going through Mephibosheth's mind? Perhaps he was afraid because he thought David would kill him so that he wouldn't try to take the throne.
II Samuel 9:6-7- Now when Mephibosheth, the son of Jonathan, the son of Saul, was come unto David, he fell on his face, and did reverence. And David said, Mephibosheth. And he answered, Behold thy servant! And David said unto him, Fear not: for I will surely shew thee kindness for Jonathan thy father's sake, and will restore thee all the land of Saul thy father; and thou shalt eat bread at my table continually.
Oh the relief! We don't know what stories Mephibosheth had been told about David. We don't even know if Mephibosheth knew that his father and David were best friends. But, what Mephibosheth did know was that David was going to take care of him.
II Samuel 9:8- And he bowed himself, and said, What is thy servant, that thou shouldest look upon such a dead dog as I am?
David had made a promise and he fully intended to keep it.
II Samuel 9:9-10- Then the king called to Ziba, Saul's servant, and said unto him, I have given unto thy master's son all that pertained to Saul and to all his house.Thou therefore, and thy sons, and thy servants, shall till the land for him, and thou shalt bring in the fruits, that thy master's son may have food to eat: but Mephibosheth thy master's son shall eat bread alway at my table. Now Ziba had fifteen sons and twenty servants.
David gave Mephibosheth back all of Saul's property. He even gave him back his grandfather's servant to take care of the property. But, Mephibosheth wouldn't be sent away. He would get to eat with the king!
II Samuel 9:11-13- Then said Ziba unto the king, According to all that my lord the king hath commanded his servant, so shall thy servant do. As for Mephibosheth, said the king, he shall eat at my table, as one of the king's sons. And Mephibosheth had a young son, whose name was Micha. And all that dwelt in the house of Ziba were servants unto Mephibosheth. So Mephibosheth dwelt in Jerusalem: for he did eat continually at the king's table; and was lame on both his feet.
What a beautiful story! You see, Mephibosheth hadn't done anything to deserve this honor. He didn't win any battles like the Mighty men. He wasn't a ruler or a dignitary. He was a cripple who benefitted from the choice of someone else, and the promise of a stranger.
We are a lot like Mephibosheth. Did you know that? We aren't strong or mighty. We aren't noble or royal. But, Christ made a choice that affects us. He died for our sins. And God made a promise
to save all who accepted salvation through Christ's death. We didn't do anything to deserve it, but we get the chance to sit at the table of the KING!
Posted by JCPennyT at 6:00 AM

All these soldiers showed up when David was crowned king of Israel. Now, David was a king with a castle and a kingdom and now a great army! 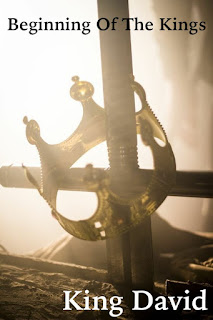 II Samuel 3:31-32, 35-37- And David said to Joab, and to all the people that were with him, Rend your clothes, and gird you with sackcloth, and mourn before Abner. And king David himself followed the bier. And they buried Abner in Hebron: and the king lifted up his voice, and wept at the grave of Abner; and all the people wept.  And when all the people came to cause David to eat meat while it was yet day, David sware, saying, So do God to me, and more also, if I taste bread, or ought else, till the sun be down. And all the people took notice of it, and it pleased them: as whatsoever the king did pleased all the people. For all the people and all Israel understood that day that it was not of the king to slay Abner the son of Ner.
Posted by JCPennyT at 6:00 AM